In Japanese folklore and in Asian culture in general, the fox, called kitsune, has an important meaning. On the one hand, as companions of the deity Inari, they are considered lucky charms, but on the other hand, they can also bring disaster. In mythology, kitsune can take any desired shape, but they often appear as a beautiful woman who falls in love with a man. It is even said that these women can start families. However, if her husband notices that his wife is really a fox, she disappears forever.

In Japan, the fox was seen as a confidant of the fertility goddess Inari in earlier times. Fertility in Japan is associated with both human reproduction and rice planting, and since rice was the unit of wealth in Japan, the fox became the messenger of wealth and also received the symbolism of fertility.

Since Japanese foxes are said to have magical abilities, they are also considered lucky charms. The power of these abilities is reflected in the number of fox tails – the more fox tails a kitsune possesses, the more pronounced his ability. The most powerful foxes have nine tails.

In Asia, the fox is a very popular tattoo design with a peculiarity: it has up to nine tails. “Kitsune” literally translates to “fox” in English, but the term is much more descriptive of the illusory and magical nature of these forest dwellers. The tail of the kitsune is said to reflect the magic within the animal, and those with many tails are said to be far wiser than those with a single tail.

Kitsune are iconic creatures from Japanese mythology that exist as wise foxes with shape-shifting abilities. Tattoos featuring these enigmatic and bold creatures are meant to represent both trickery and friendship.

Kitsune are usually represented by up to nine tails and their Japanese-style images are distinctly beautiful and unique. The brilliant color schemes and sharp, abstract styling are aesthetically pleasing and richly detailed. Many kitsune are depicted with a skull attached to the top of their head like a hat, which is more indicative of the type of impostor within the shapeshifters.
The symbolism behind a Kitsune tattoo has many possible interpretations, each unique to the wearer. It can be either good or evil, but the general nature of the image is about wisdom, strength and magic. These creatures can bring both good luck and terrible misfortune, so their duality is popular among those who respect that reality is never one-sided.

Kitsune masks are a derivate of the Oni mask, that is very common in Japanese tattoo art. It symbolizes a belief in the spirit world, where demons perform their roles, punish the unjust and bad. Oni are known as evil, but those who are good symbolize protection. 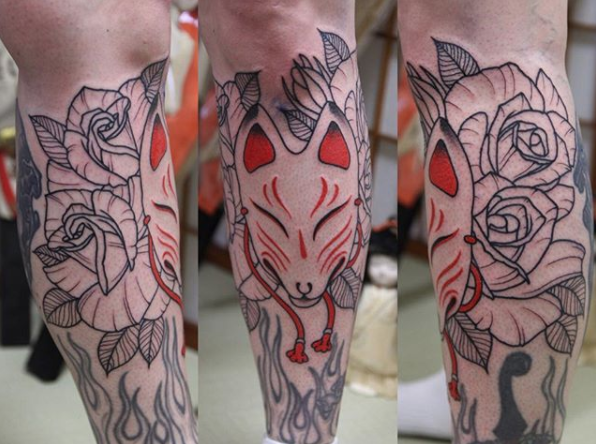 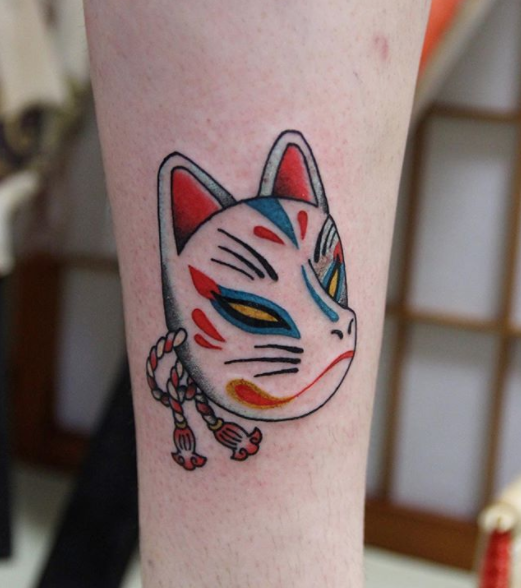 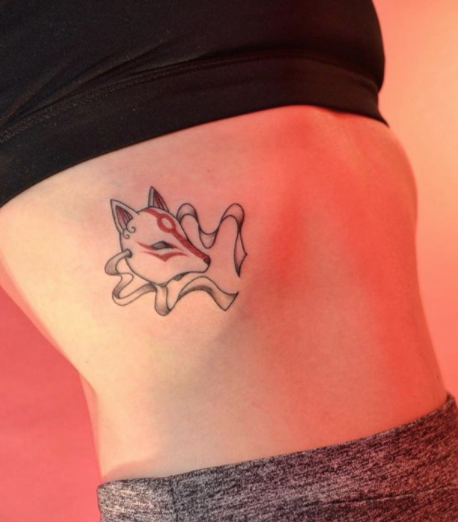 Kitsune, like Tanuki in Japanese mythology, belong to the classic tricksters and master magical abilities such as shape-shifting. The transformation into a human is possible for him from the age of fifty or a hundred. The transformation is said to be greatly facilitated if the fox holds bones (preferably a skull) or duckweed leaves above his head. As a human woman, it likes to seduce men and marry them in order to take its advantage of them, or afterwards to imperceptibly suck the energy out of him and the whole family, making them sick. However, there are also numerous true love stories between a fox woman and a human man. They are even capable of having children together. However, if the vixen is exposed, she leaves her family immediately. They can also create illusions, take possession of people and supposedly even fly.

As a cheeky trickster, kitsune are said to have deceitful and cunning traits. They like to play pranks and have an evil nature. Popular victims include Buddhist monks and merchants. The fox can be unmasked by people who discover its fox tail, or by dogs. Sometimes they also get a little careless themselves, for example when they have been drinking, so that they betray themselves and give up part of their magical transformation. Sometimes a whisker flashes out or an ear pops up.

However, the intelligent kitsune also have a good side. For example, they are messengers of the harvest god Inari and as such symbolize fertility. Offerings are made to the exclusively white foxes of the fox deity – for example, at the Fushimi Inari Shrine in Kyoto (one of over 20,000 Inari shrines in total). The foxes are used to protect people or places, bring good luck, and drive away evil spirits. To this end, they are popularly placed as guardians of the northeast gate, as this is seen as a demon gate. Kitsune always keep their promises and pay their debts.

In Japan, when the sun shines during a rain, people talk about a fox wedding (Kitsune no Yomeiri): it is said that if you look closely, you can see the procession of the fox bride.

Tribal tattoos are one of the most popular choices in the tattoo world. The term is quite extensive and sometimes we even call tribal tattoos some inked designs that are not tribal since they do not belong to any tribal culture. They simply have repetitive elements formed by thick lines and use black ink, just like real tribal tattoos. Such is the case of the kitsune tribal tattoo, a very common choice among men and women. This tattoo design has more to do with the aesthetics of tribal tattoos and the symbol of kitsune in general.