Skull tattoos have been a favorite design since the heyday of sailors and exploration. Today, skulls are often associated with death and decay. They are symbols of mortality and the end of life.

It can be difficult for people to accept the popularity of skull tattoos when they mean such dark and depressing things, but the fact is that skull tattoos often have a very positive or motivating meaning life or vitality.

Skull tattoos do represent death, but they typically represent the fleetingness of life. “Memento mori” is latin for “remember your mortality,” meaning that it is important to keep your inevitable death in mind so that you may live life to the fullest while you still can. Death comes to us all, so that thought shouldn’t be depressing. Instead, an unlived life is the depressing thought.

Skull tattoos, a little like death tattoo designs, remind people to experience obstacles and hardships, to take chances and be their best. “All is vanity” is another common motto seen with skull tattoo designs. This design shows that death eventually comes to everyone, and anything achieved in life will pass or fade away. Oftentimes, this combination of meaning and imagery represents a belief in an afterlife. People who choose these tattoos want to remember that their mortal life is meaningless in comparison to the wonders and glory that await them after death.

Strangely enough, skulls are also used as a good luck tattoo design. Gamblers wanting to change their bad luck sometimes choose symbols of ill will and bad luck, like skulls and black cat tattoo designs. These tattoos, contradictory though it seems, is meant to bring the gambler success in the future. Perhaps this tattoo is based on the idea that skulls not only represent death, but also change. This symbolic change is neither innately bad nor good.

In the Kabbalah belief system, the skull represents rebirth and is a time for celebration, not sadness, sorrow, and mourning. In the same way, death does not always mean something negative. Death can be a positive experience and remembering those who have died can be uplifting.

The skull has also been a symbol of triumph and rebellion. When a group won a war or conflict, they sometimes piled the heads or skulls of their enemies for all to see. The skulls served as a reminder to those who would harbored thoughts of revenge; they too would experience the same fate as their fallen comrades if they tried to attack. The anarchist movement and anarchy tattoo designs sometimes use the skull as a symbol of their political beliefs. They used the skull and crossbones symbol, which they took from an earlier pirating flag.

Obviously, skull tattoo designs has a very different meaning depending upon how it is viewed and the historical understanding of those who are looking at it. For this reason, it is important to understand, at least vaguely, the possible connotations implied by a skull tattoo design. But, like all tattoos, the choice is very personal and the meaning can be entirely private.

The traditional skull tattoo is without a doubt an option worth considering and with so many possibilities the choice is not a simple one.

You can opt for a classic, simple skull design, without other accents, or on the contrary, you can add elements and stylizations that will highlight and complete the desired design and message.

Simply put, the traditional skull tattoo is based on the simple human skull designed, usually, but not mandatory, black or grey, which can be inked in the desired size, alone or in association with complementary and contrasting elements. 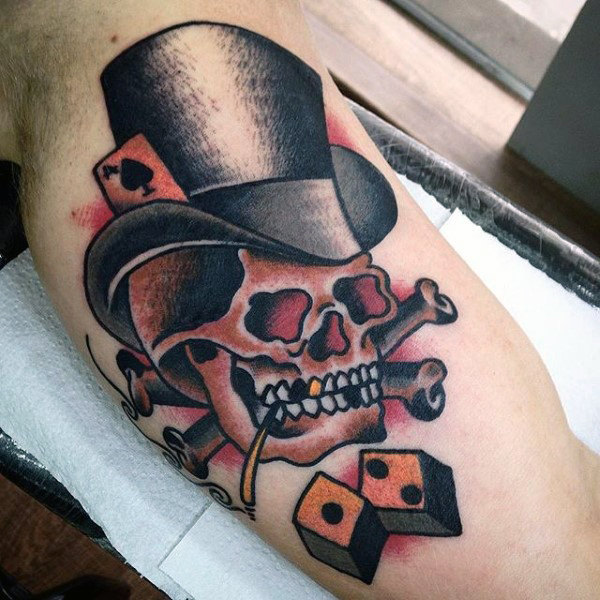 In Mexico, the Day of the Dead is a time of festivity and celebration. This festival celebrates the lives of family members who have passed. For this day, the dead are revered, honored, and respected.

These skulls are usually idealized and very stylized. They are decorated with bright colors and vibrant flowers, making them very extravagant. Sugar skull tattoos are very popular tattoo designs among Latin American men. 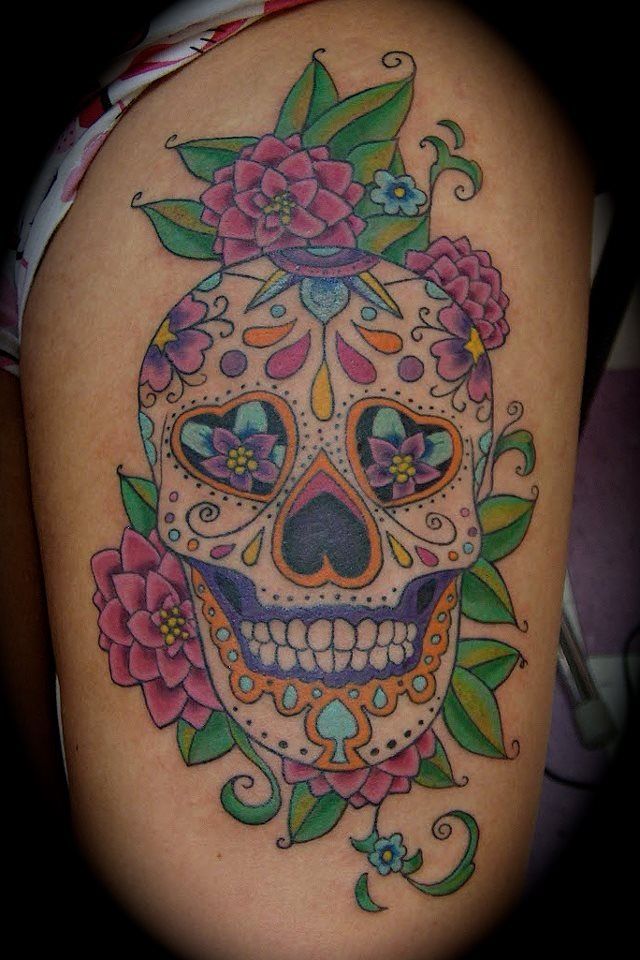 Rose tattoos are frequently associated with other symbols including skulls to get a more powerful message or effect.

The rose skull tattoo represent the contrast between life and death or beauty and decay. 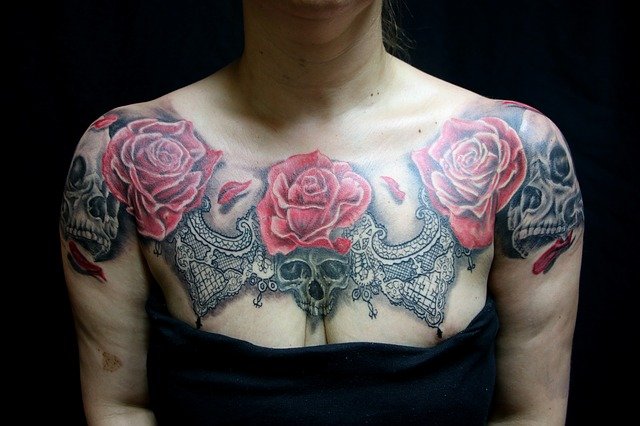 In the Christian belief system, skull tattoos often represent eternity and the repentance necessary for eternal life. Most Christians believe in an eternal life spent in either heaven or hell.

The earthly remains, portrayed as the skull, shows that the body is left behind and becomes nothing, but the soul goes on.

Some Christians use skull tattoos to remind themselves of a life according to God’s will and the Bible, so that they might end up in heaven after death. 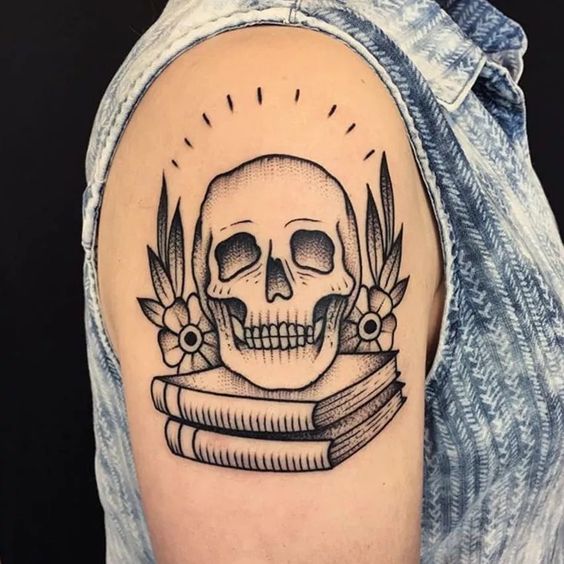 Pirate tattoo designs often use skulls. The pirate’s skull design, known as the Jolly Roger, features a skull with the crossbones underneath.

The Jolly Roger was flown in rebellion of governmental rule and authority. The anarchists embraced this way of life, this denial of organized authority, and adapted the Jolly Roger for their own purposes. 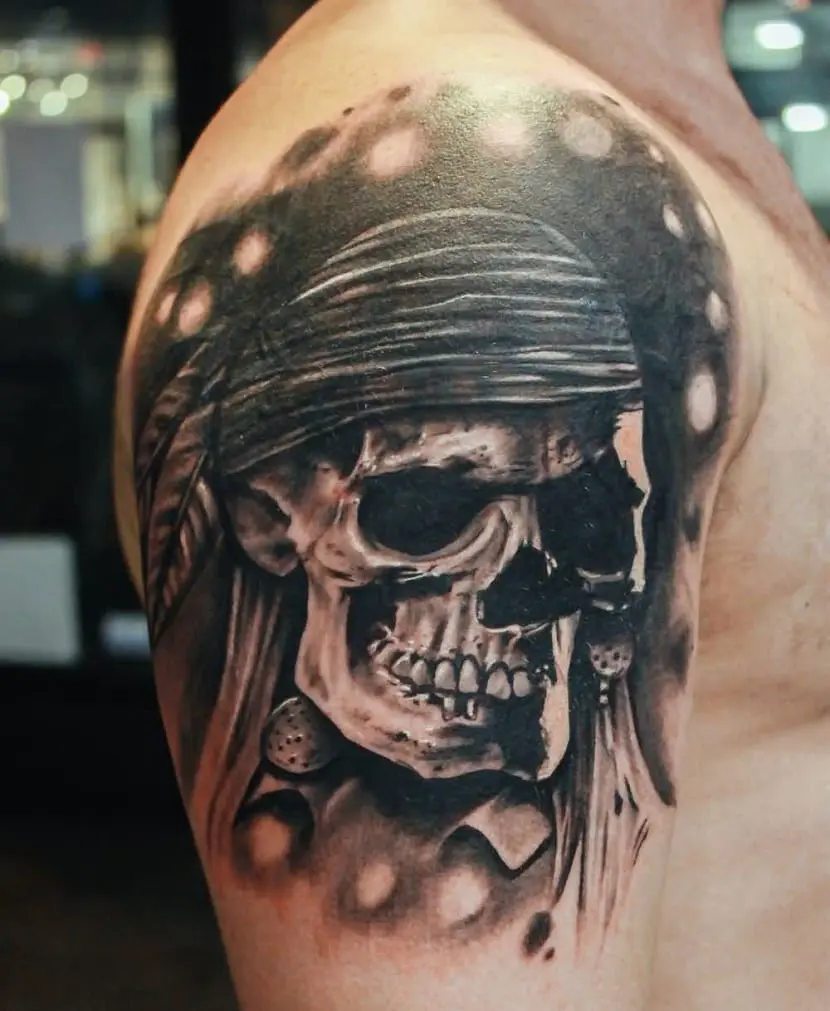 Nazis and Neo-Nazis have embraced the skull symbol, too.

However, this design features a skull with the crossbones placed behind the skull, rather than beneath it. Interestingly, this symbol has been embraced by subcultures other than skinheads and prejudiced groups.

Bikers believe that the Totenkopf, as it is known, is a protective sigil that will keep them safe from harm or death, so its inclusion is frequent in biker tattoo designs. Nowadays the Totenkopf is more associated with bikers rather than hate groups. 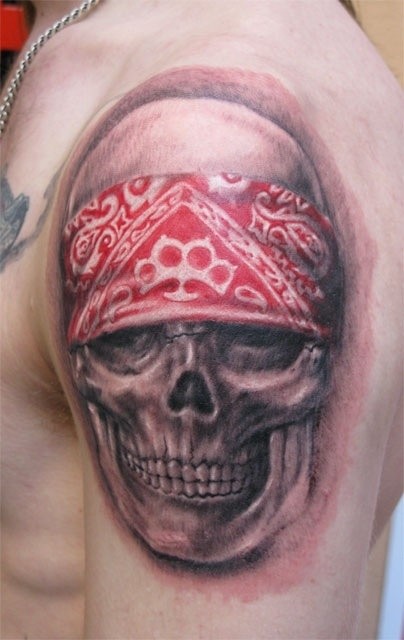 Unlike the traditional skull tattoo, punisher skull tattoo distances itself from the spiritual meaning of death.

The image of the punisher skull is associated with doing what is right at all costs, a sense of duty and justice. Those who fit the punisher skull tattoo are people who identify with this attitude both physically and mentally, and convey this message. Possibly this is why this tattoo is sometimes adopted by police officers or even soldiers.

Punisher (Francis “Frank” Castle Sr.) is a fictional, negative hero who first appeared in 1974 in The Amazing Spider-Man # 129. The character was created by Gerry Conway together with artists John Romita Sr. and Ross Andru. .

Since 1985 the Punisher appears in the Marvel Comics Universe comics, as a counter hero,  identified by the specific skull inscribed on his chest. This is the motif in almost all Punisher skull tattoos.

Like skull tattoos, animal skulls can be represented in different ways through tattoos. Over the years, animal skull tattoo designs have become popular because they usually provide some drama and mystery to the person, in addition, various details are added that embellish and give a quite interesting appearance.

Some think they are bad luck, others that they are always up to something, but for many people cats are majestic, elegant and almost magical animals. Therefore, it is not surprising that more and more people decide to decorate their skin with a cat tattoo.

Cat skull tattoos are a curious and somewhat creepy tattoo designs that have incredible versatility. There are many cultures in which cats have spiritual meaning and cat skull tattoos will rather have obscure attributes. They look great and are a great addition to anyone’s tattoo collection.

The cat skull tattoo is more suitable to a dark contemporary style such as blackwork or dotwork. 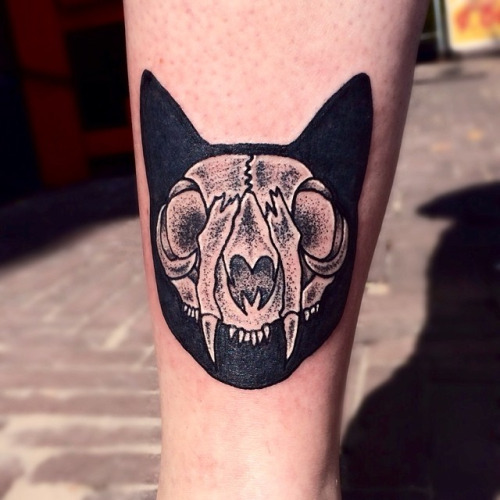 Deer is one of the most tattooed animal as it is considered an animal totem. 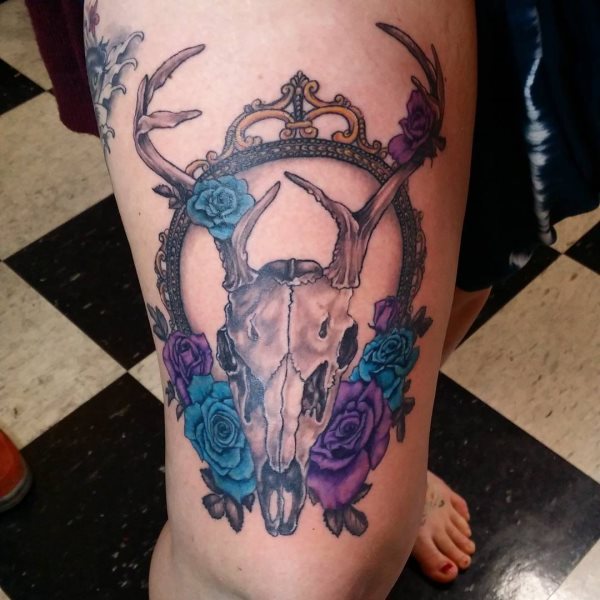 Acknowledgement of death (symbol of skull tattoo) and protection for life (a symbol of the cow) are two of the most common meanings associated with bull skull tattoo.

The use of a bull skull as an artwork is very old. Known as bucranium, carved bull skulls are ancient elements in Classical Architecture, very often decorating temples in ancient Rome.

It is based on the Neolithic practice in Eastern Anatolia, in which sacrificed oxen’s heads were displayed on the wall’s temples, clad in white plaster. 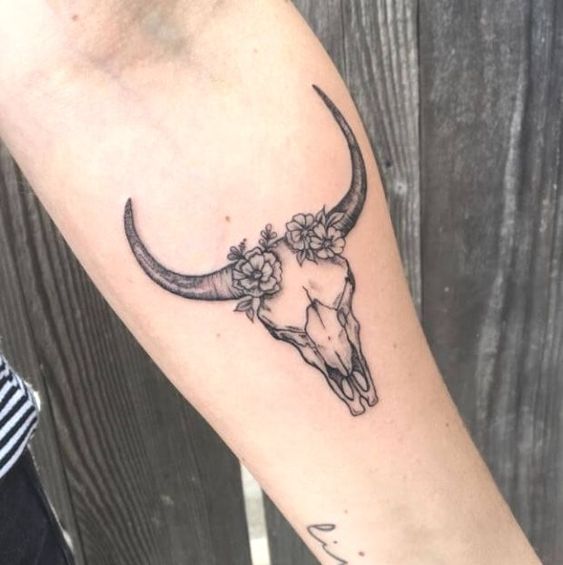 Such a powerful and meaningful symbol, ram tattoos would look good on both women or men.

It would be absurd to deny the predominance of one of the genres in certain tattoos. This is also the case, for example, with tattoos of rams, which represent the male sex… but that is only part of it.

However, another of the representations of this animal is leadership, power and capacity to act, something that is shared by both men and women. They are a symbol of both balance and strength.

Ram skull tattoos can be really beautiful, both in design and meaning, giving the wearer an air of mystery and determination which does not go unnoticed. 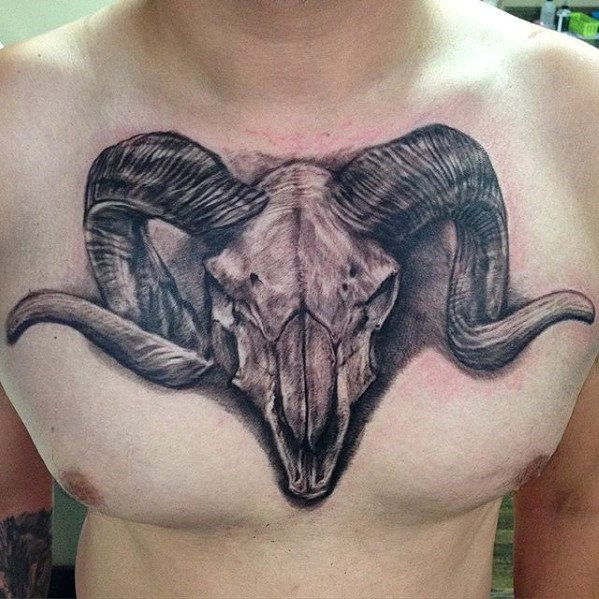 Both wolves and skulls are versatile elements when it comes to tattoos.

The skull usually appears in a variety of pieces, either alone or accompanied by other images.

The other component of this tattoo is the wolf. These beautiful wild creatures are poorly understood. They are associated with both positive and negative elements.

Wolves are associated with strength, fertility, freedom but also with aggression, betrayal or isolation. They are symbols of intelligence, loyalty and group protection.

The mixture between wolf and skull creates a design that is definitely original and personalized, with a deep and imitate meaning. 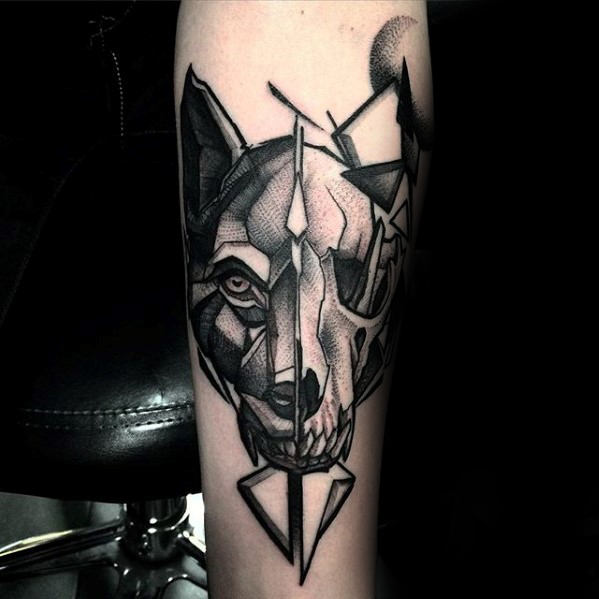