13 Most Popular Symbols of Aztec Tattoos​

“Aztec” usually refers to a group of indigenous people who lived on an island in Lake Texcoco. Sometimes, though, it refers to a tri-city treaty known as the Aztec Empire, which included the island city and two other cities. The Aztec Empire fell in 1521 when they were conquered and vanquished by Spanish conquistadors attempting to colonize Mexico and Central America. After the natives were obliterated, the Spanish settlers erected Mexico City on the ruins of the Aztec island.

Fortunately, Aztec culture and history was not entirely lost when they were defeated. Some surviving people of Aztec ancestry and language wrote about their people, along with several Spaniards, both conquistadors and priests, who recorded their experiences with the Aztecs and their observations about the culture. Furthermore, there is a decent amount of archeological evidence and documents that have helped to create an idea of the Aztec way of life.

The most commonly known, and perhaps most fascinating, facts about Aztec culture is their religious beliefs and their rituals sacrificing humans. The Aztecs are famous for making living offerings to their gods, particularly the god of the sun called Huitzilopochtli. A sacrificial dagger was used to remove the beating heart, which was then offered to this god who the Aztecs believed guarded them and gave them life. Two other gods, the war god Tezcatlipoca and the serpent god Quetzalcoatl, were both very important to their culture and way of life. For obvious reasons, the war god was revered by the warriors and people because he protected the fighters and helped them achieve victory over their enemies.

Interestingly, the somewhat opposite serpent god was also praised for his inspiring creativity and wisdom. Although not the most powerful god of the Aztec religion, the serpent god was one of the most revered and was worshiped in all aspects of Aztec culture. Apart from war, religion, and human sacrifices, the Aztecs are known for their art and creativity. Interestingly, the only appropriate and honorable work for a warrior in times of peace, when no fighting was required, was creating poetry and partaking in other artistic expressions, like theater and drama.

The most important goddesses of Aztec religion and mythology, also featured in Aztec tattoos were:

Xochiquetzal meaning “The Maiden” was Goddess of Beauty and Art, the protector of fertility, beauty, and female sexual power, protector of motherhood, of pregnancy and childbirth and promotor of handcrafts and art.
Coatlicue meaning ‘The Serpent Skirt’ was the Mother of Gods, the mother of to moon and the stars.
Chalchiuhtlicue meaning “She Who Wears a Green Skirt’ the Goddess of Rivers and Waters, was the mother of all waters on earth, rivers, lakes and oceans.

Beyond the aesthetics and depth of the image, just like Aztec gods tattoo, the Aztec goddess tattoo conveys a protective message, with a spiritual and archaic value for the wearer.

The most popular Aztec tattoo designs capture important aspects of Aztec culture. Symbols or images of the all-important sun god are common. He is usually illustrated as a blue figure with a serious and fierce countenance, wearing a feathered crown and full armor. He is often symbolized by an Aztec sun design. The sacrificial Aztec dagger used on human sacrifices is also favored. Likewise, Aztec warrior tattoos, Aztec god tattoos, Aztec goddess tattoos, Aztec girls tattoos, the serpent god, who is also feathered, Aztec calendar tattoos are common. Other Aztec motif tattoos are usually inspired by remnants and artifacts left behind by the ancient civilization, like Aztec pyramid tattoos, Aztec eagles tattoos or Aztec artwork tattoos.

Some people are fascinated by this prehistoric and often brutal culture that dominated the region until they were annihilated. Others feel a connection, whether ancestral or philosophical, to the extinct civilization. Whatever the reason, people of all ethnicities find the Aztec motif an interesting and meaningful tattoo theme. It embraces both aspects of the tribal tattoo trend, as well as more specific design elements that have a personal and intimate meaning. These tattoo designs can be simultaneously decorative and symbolic.

Furthermore, Aztec tattoos create a connection to a lost way of life, one that is mysterious and intriguing without being too obscure. The Aztecs were incredibly powerful and spent their time conquering and dominating local tribes and villages. War and fighting was a way of life, and many people find this seemingly primitive and simple existence to be appealing. Contrastingly, the Aztecs also valued wisdom, art, and culture, which seems contradictory to their physical and violent nature. Many people are captivated by this juxtaposition.

Aztec sun stone is probably one of the most representative images for the Aztec calendar tattoo. It’s a circular stone representing the Aztec calendar system which consists of 2 calendar cycles. The first called xiuhpōhualli (translated as number of years) is the agricultural calendar consisting of 365 calendar days, based on the sun, and the second, the tōnalpōhualli (translated as number of days) is the sacred calendar, contains a cycle of 260-day rituals. Together they form the calendar round or the 52-year “century”

The Aztec warrior is another important representative figure for the Aztec tattoo. In Aztec culture, all boys were trained to be warriors when they turned 15, therefore the Aztec warrior will be often be depicted as a young man or a boy in tattoo.

The outfit and the armour of a warrior varied depending on his rank or achievements. The Aztec warrior tattoo will have different meanings also according with different elements present in their appearance. For example, the presence of a macuahuitl together with wearing the chimalli will be an sign that the warrior captured a soldier and the wearing of sandals will mean that he has two captures.

The eagle is itself a popular element in tattoos. Being associated with the Aztec warrior, eagles are important symbols of Aztec tattoo. In Aztec army and culture, the Eagle warrior were considered superior, the eagle helmet being the element to differentiate them. Considering the popularity of these two motifs, the meaning of Aztec eagle tattoos can have both stylistic and symbolic connotations.

Surviving artwork and craftsmanship are usually embraced as Aztec tattoo designs, even without knowing how significant the artwork was to the culture. 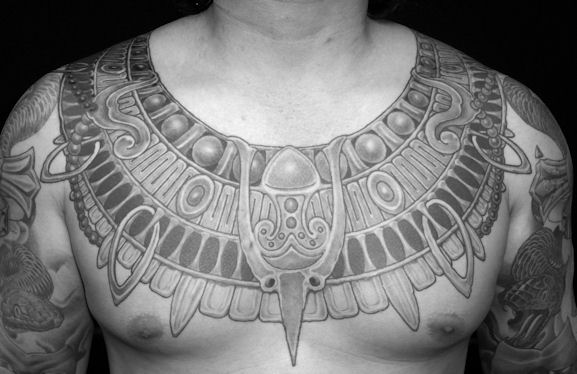 In tattoo, Aztec pyramids are present alone or together with other Aztec symbols, like Aztec gods or Aztec Calendar as seen in the image below:

The Sun is an important element for many cultures and religions, being deified by most ancient civilizations. The Aztec sun tattoo takes over the central element of the Aztec Sun Stone depicting the Sun God.

A girl with Aztec elements is a very sought after and common tattoo. The Aztec girls tattoo, however, has little in common with the real image of the Aztec woman of that time, having more to do with the modern predilection to discover herself in symbols of the past.