Ethnographers widely agree that dreamcatchers were made and passed down by Native American peoples. The word “asabikeshiinh” of the Ojibwa Chippewa translates as “spider” and describes the basic structure of the spiritual symbol. Unlike other cultures, the Indians viewed this animal as having protective and comforting qualities.

According to Ojibwa legend, a mystical “spider woman” protected the entire tribe. The caring protector created the first dreamcatcher for a distraught mother whose daughter was plagued nightly by nightmares. Due to the spiritual culture of the Indians, the dreamcatcher was henceforth consecrated as a talisman in a ceremony and then passed on from one generation to another.The dreamcatcher is currently a motif in vogue. It is mainly preferred by women because it looks playful and delicate. However, men are also increasingly getting this spiritual symbol stitched on their bodies. 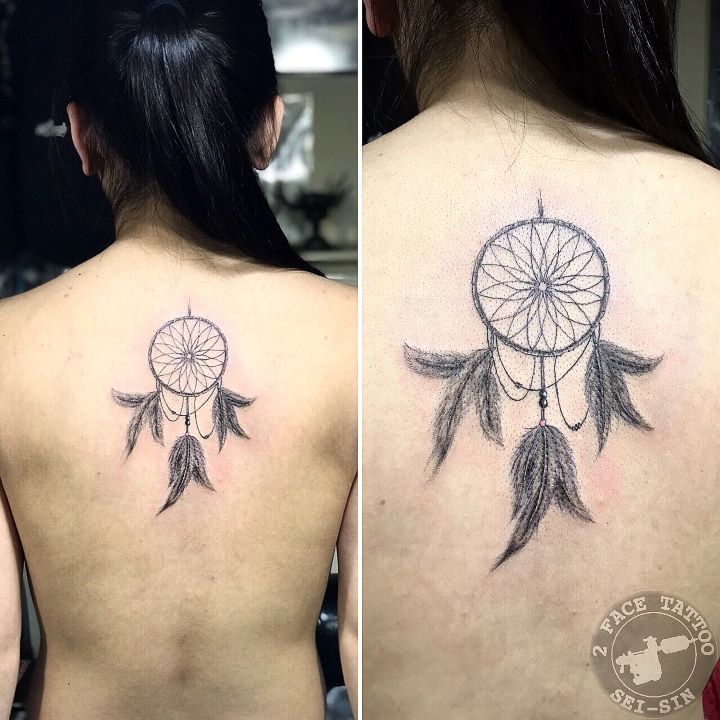 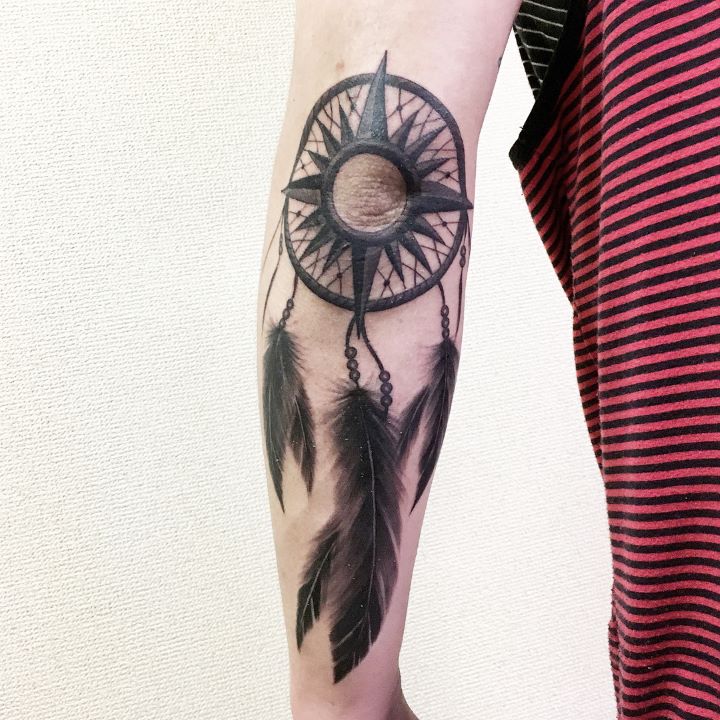 A dreamcatcher is a Native American talisman that is supposed to protect its owner from bad dreams. According to the belief, good and bad dreams could change a person’s life permanently. The North American natives made these artifacts from a wicker hoop and wove fibers in the middle of it in the form of a yarn spider web. To this they attached various decorations such as feathers, beads, leather or shells.

A dreamcatcher was usually made by grandparents and consecrated in a ceremony as a gift for their grandchildren. The dreamcatcher is hung over the sleeping place and is supposed to protect against nightmares during sleep, as they get caught in the web. The morning sun eventually neutralizes them. However, the positive dreams can slip through the net and reach the person asleep.

During the hippie movement in the 60s and 70s, the superstition about the dreamcatcher spread in many cultural circles in North America and has been also known in Europe ever since. Today, they come in countless different varieties and colors. Nevertheless, all dreamcatchers have one thing in common: their basic shape, consisting of a hoop in which a net is stretched.

The legend of the “spider woman”

Ethnographers widely agree that dreamcatchers were made and passed down by Native American peoples. The word “asabikeshiinh” of the Ojibwa Chippewa translates as “spider” and describes the basic structure of the spiritual symbol. Unlike other cultures, the Indians viewed this animal as having protective and comforting qualities.

According to Ojibwa legend, a mystical “spider woman” protected the entire tribe. The caring protector created the first dreamcatcher for a distraught mother whose daughter was plagued nightly by nightmares. Due to the spiritual culture of the Indians, the dreamcatcher was henceforth consecrated as a talisman in a ceremony and then passed on from one generation to another.

Traditionally, a dreamcatcher consists of a fine thread net with a hole in the center, woven in a round wooden frame made of willow branches and sacred herbs. The ring made of willow branches symbolizes the eternal cycle of life and should attract the good. The thread net, or “spider’s web”, is made of yarn or animal fibers and can be decorated with feathers, beads and shells. However, the decorations are not for aesthetic purposes, but to increase the power of the dreamcatcher. The feathers play a special role, because their movement signified the arrival and departure of a new, beautiful and peaceful dream. In some cases, the beads were placed in the web in such a way that they marked eight legs of a spider. A single pearl, on the other hand, signified the choice of a single path in a person’s life, and four pearls signified protection from all directions.

The dreamcatcher tattoo stands mainly for:

Dreamcatchers were used for personal and family protection as well as to ward off negative energies. To let its effect unfold, the dreamcatcher should be hung over the bed or the sleeping place. With the coming morning sun, the bad dreams are then neutralized.

The dreamcatcher tattoo used to be associated mainly with people with alternative or spiritual attitudes. Meanwhile, however, this lucky charm has become more of a fashion tattoo and is stung more and more often. Thus, some wear it simply for aesthetic reasons on the back, arm or as a small tattoo on the wrist, without giving it a deeper meaning. In general, however, the meaning of the dreamcatcher motif is quite clear and hardly offers versatile scope, such as the owl tattoo with opposing meanings.

The dreamcatcher is a vertical motif and is suitable for several parts of the body. Especially popular as placements for this motif are the back, ribs and also the hips. So, you should offer your tattoo artist a lot of space to give free rein to his creativity, because the dreamcatcher can be easily realized in a variety of tattoo styles and can be combined with many other elements. Especially suitable for it are the Black & Grey, Watercolor and Fine Line styles. You can wear a very small fine line dreamcatcher behind the ear, which protects you from the intrusion of negative thoughts. 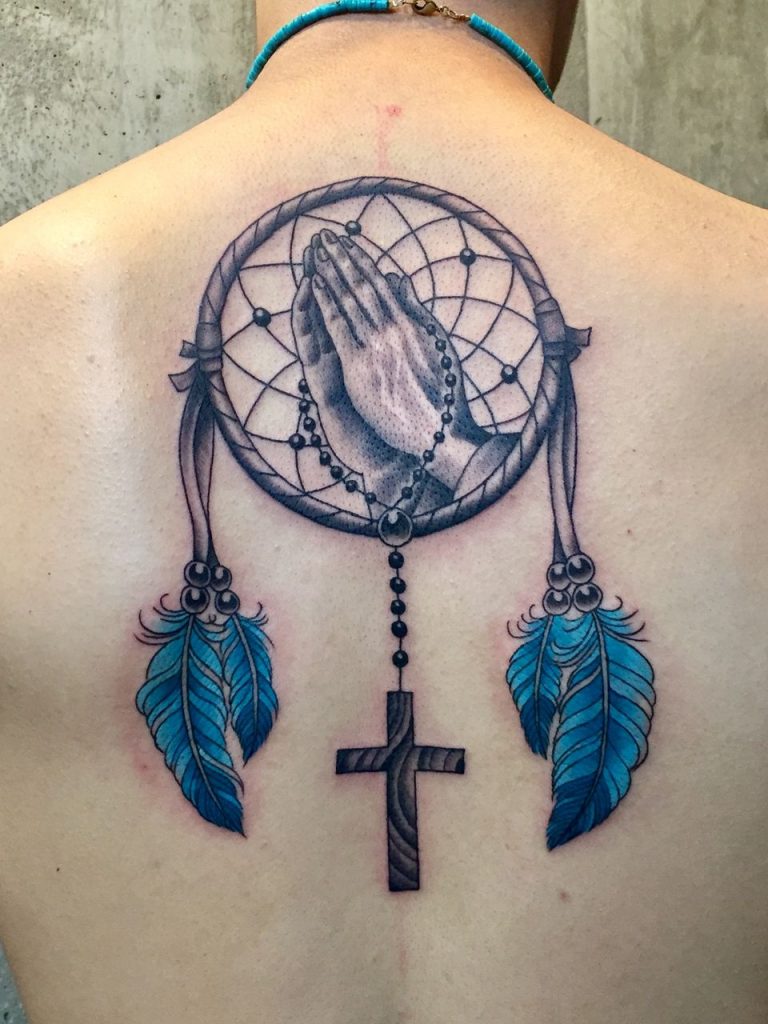 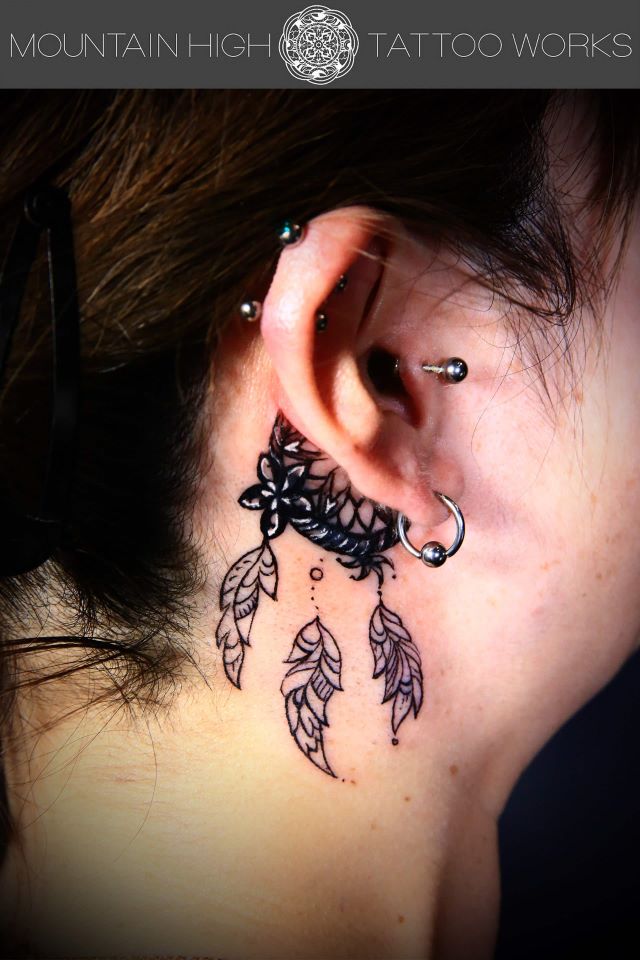 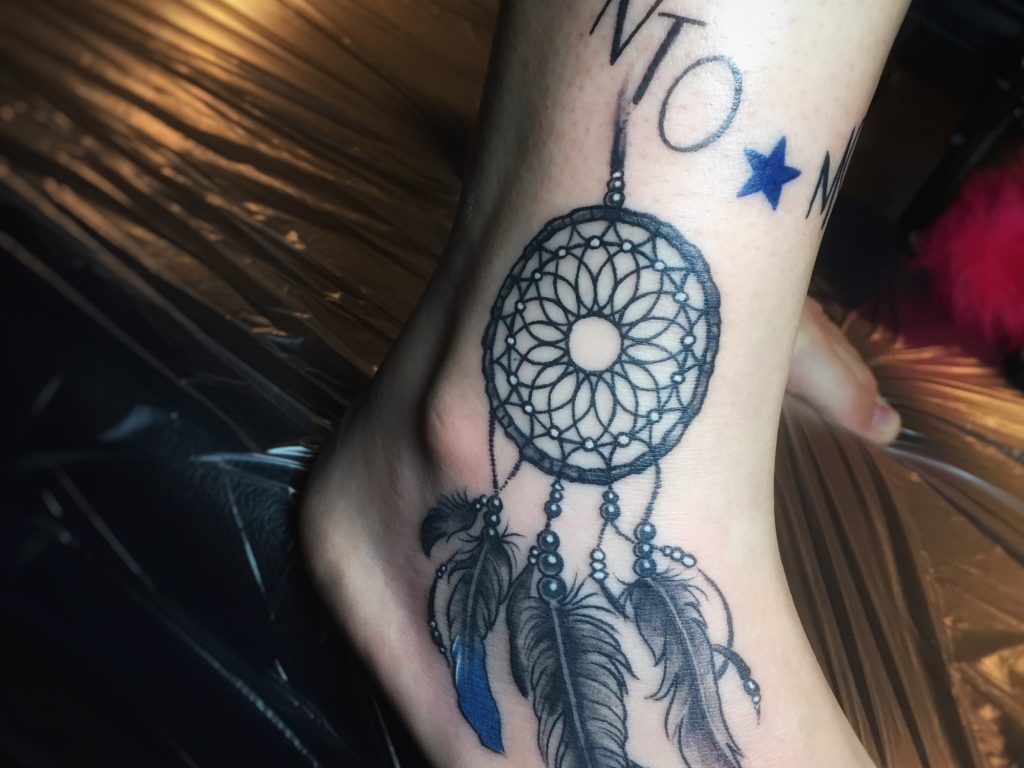 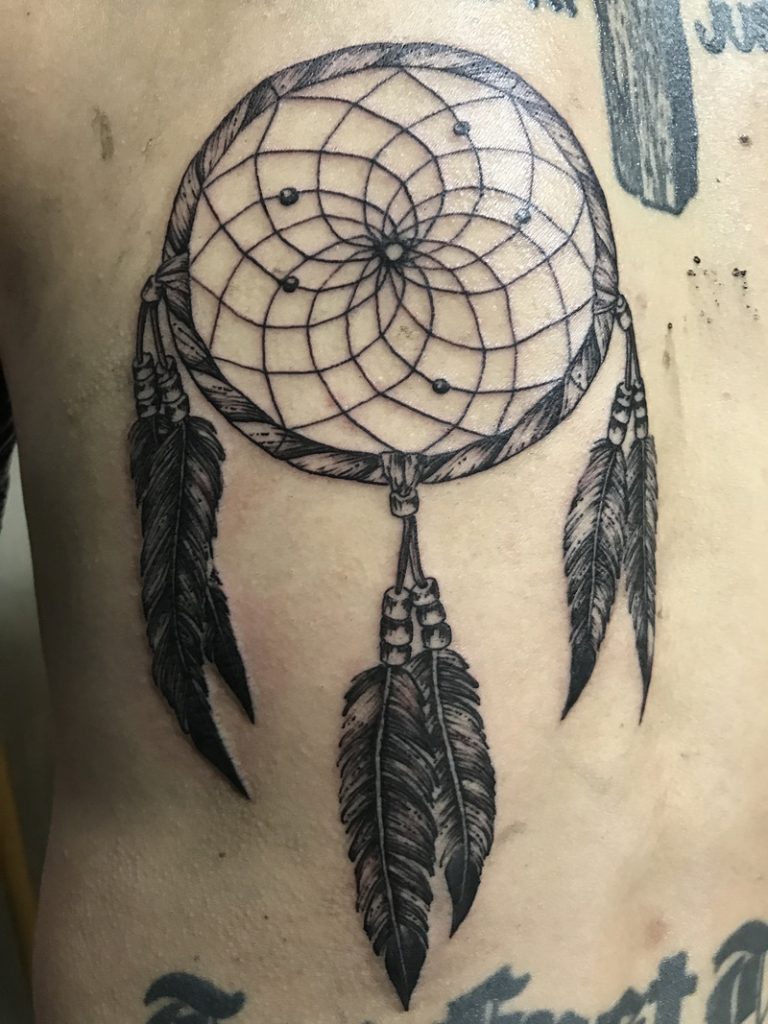 Since the dreamcatcher tattoo is so widespread, you should make sure that yours will be completely personalized. Don’t pick for the tattoo artist the first nice template from the internet. Just get inspired by the available tattoo images and use your creativity to draw your own template or maybe ask a friend to design it for you. Alternatively, it is always a good idea to combine the dreamcatcher with one or more other elements to give it a more personal touch: for example, with certain flowers, animals or some other positive symbols.

Being very special as a tattoo motif, the dreamcatcher is not easily compatible with every other motif. If you plan to get tattooed more often, and you do not want to end up looking like a patchwork of different motifs, you have to choose your dreamcatcher style very well, to fit in with the existing and the future tattoos.

Due to its spiritual background, the dreamcatcher is a great motif for all alternative people. Whether the dreamcatcher as a talisman can also unfold its powers on the skin is up to the individual belief. As a symbol it shows a certain spirituality and reflects the belief that there is more in this world than meets the eye.

Both, the wolf and the dreamcatcher are symbols of family, loyalty and group protection. In Native American culture, the wolf is a spiritual, protective animal, an element that complements the dreamcatcher. The wolf dreamcatcher tattoo is one of the most common choices especially for man.