Foxes have played many different roles in traditional folklore. They are associated primarily with cleverness and cunning, wisdom, and feminine magic and divinity in Japanese culture. They are also simply beautiful animals that translate well to tattoos.

In many folk tales, foxes are adept at transformation, taking on the form of humans or disguising themselves in other ways, once again a reference to their cunning and smarts. This idea has even leaked into mainstream English usage: “to outfox”, of course, meaning to out-smart or out-wit.
This idea of the fox as clever and quick-thinking spans virtually all cultures, and this stems from a simple fact: foxes in the wild are clever.

Most people who get fox tattoos choose a red fox as opposed to the grey, both because they’re more iconic and because the reds and oranges used in coloring them can produce some really beautiful designs.

Fox tattoos are more common for women than men, though there is no real traditional precedent for this culturally outside of Asia (the aforementioned kitsune frequently took the form of a beautiful woman). Perhaps it’s that they’re viewed as a more gentle, graceful animal than many others, even those close to them in species such as wolves.

Whether someone just loves the look of foxes, is a supporter of wildlife, or wants to appeal to the idea of foxes as quick-witted and cunning, they’ve got plenty of fox tattoo design options to choose from.

Fantasy geishas are depicted in pin-up model style tattoos, and stylized with more of an originally visual view. A geisha tattoo is an elegant and graceful choice for anyone. Steeped in superstition and ancient teachings for millennia and framed by unrestrained grace and beauty, this tattoo will always be breathtaking. 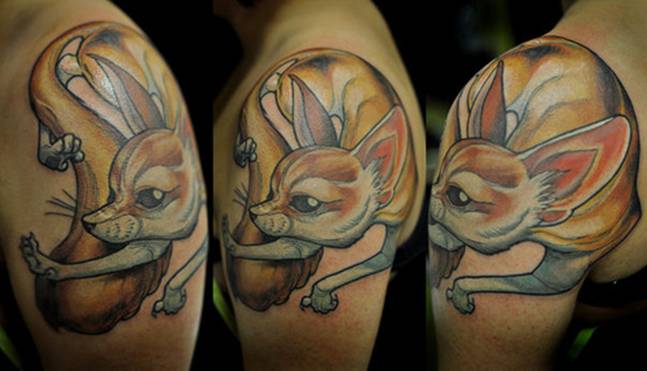 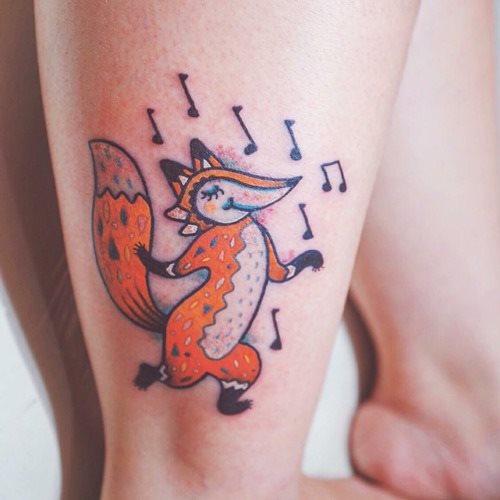 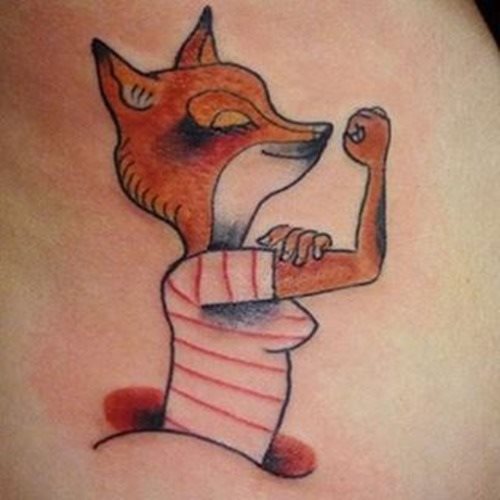 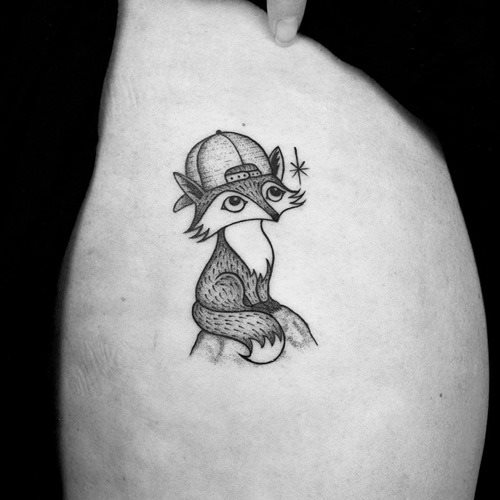 Some designs forgo the use of color altogether, opting for a black outline and, sometimes, tribal stylizations. This lends a slightly more powerful, aggressive tone to the image. 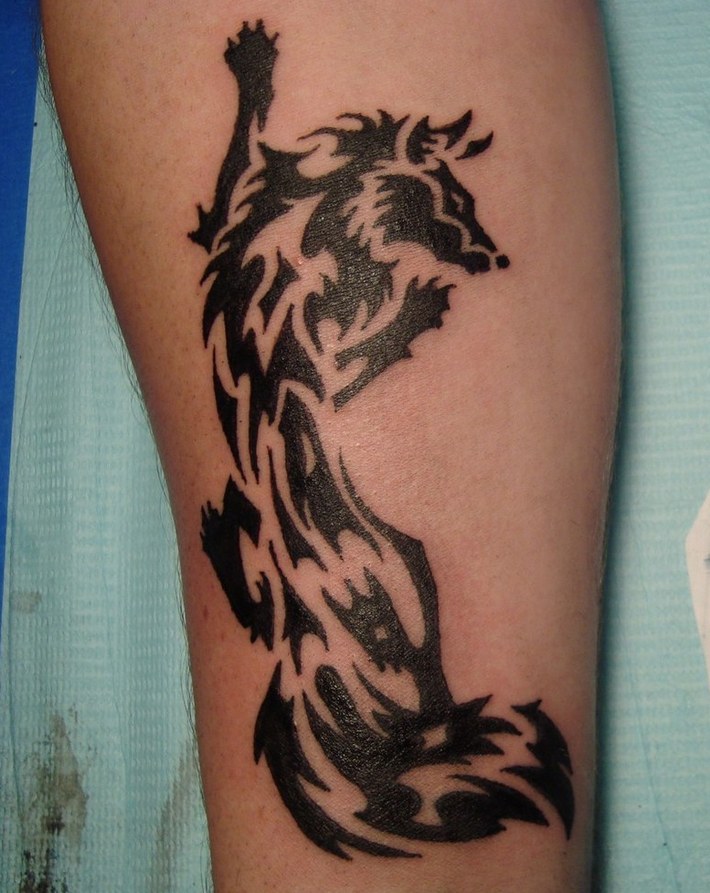 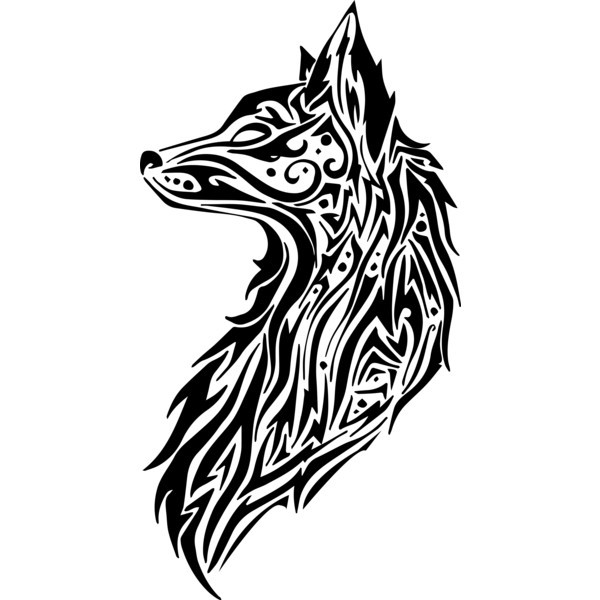 Photorealistic fox tattoos can be very well done. The level of technical skill required to capture the coloring and texture of fur is high, but when it’s done right the effects are immediately visible.

On men, tribal and realistic fox designs are more common than the cuter, cartoonish style.

Tattoos in geometric style are popular and a real eye-catcher. Because, even if you were perhaps not an overachiever in math in the past, symmetrical patterns have something very fascinating about them. One of the biggest trends among geometric tattoos are animals made of geometric figures. Owls, lions, horses, foxes, wolves and many other animals are depicted as a symmetrical image of various geometry figures, either in black or in combination with watercolors.

Geometry means symmetry and perfection, so geometric fox tattoo designs are characterized by straight lines and perfect shapes. A geometric motif is usually extremely elaborate, so such fox tattoos can only be engraved by an experienced tattoo artist. Every little detail plays a big role in the overall design.

The watercolor tattoos do not have hard edges and outlines, but are stung with smooth transitions where contours do not play a major role. Due to the uneven outlines, a lot of movement can be created. For the watercolor Fox tattoo to work, it usually needs a lot of space. It is not only about beauty, but also about the effect.

Generally, these tattoos are recommended to light skin types, because the colors need a suitable background to develop their opacity.

The small fennec fox is so cute that no woman can resist its charm. Adding the fact that this little fox lives in the North African deserts, results that the symbolism of a fennec fox tattoo emphasizes both the elegance and the resistance to stress, but also the unconventional nature of its owner. 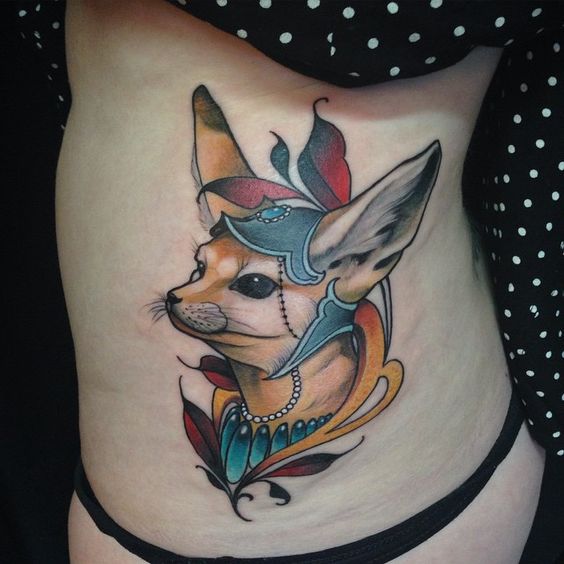 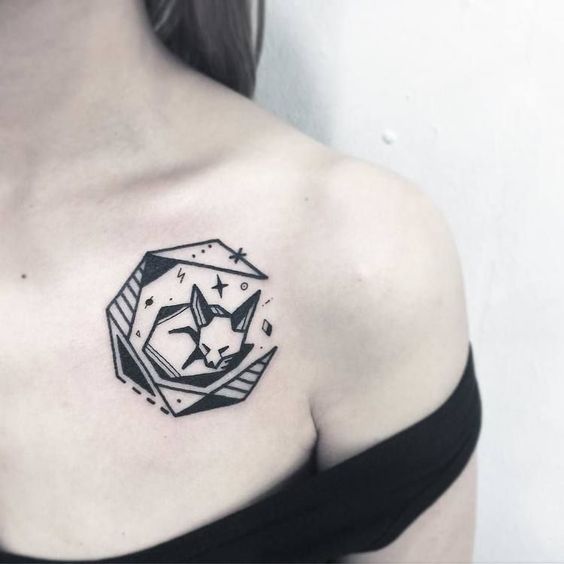 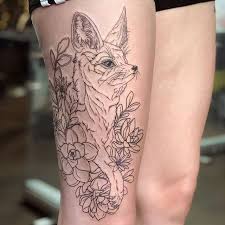 Foxes were also highly valued by the Celts, and often the bodies of great warriors were adorned with their images. It was believed that the fox will protect them from any thief, enemy, from a variety of dangers, give the wearer a sensitive intuition and help to be extremely careful. Celts assigned to the image of foxes the wisdom, honor and knowledge and believed that the red-tailed beauty is also a companion in the afterlife. Foxes value their freedom very much, that’s why after falling into a trap, they can even bite their paw to escape from captivity. A tattoo with this image is more suitable for men who demonstrate their love for freedom in such a way. But the fox that is trapped speaks of inner fear.

The Celts believed that the never-ending loops and spirals in the knots had strong protective powers. Therefore, when these two are combined in art, the resulting image is the Celtic Fox that sums up all the combined meanings and omens.

In Japan people worshipped the white fox, which they thought was sent to them by the gods. White fox meant prosperity and wealth for the Japanese.
Arctic or white fox tattoo designs have a special trait of transparency or clarity. The arctic fox designs are very well liked because of their excellent symbolism: divinity and purity. Consequently, the silver fox tattoo symbolizes: nobility, uniqueness, good taste, refinement and success.

A sleeping fox tattoo says about the human wearing that he or she aspires to be distracted from problems and to live in isolation from the outer world. 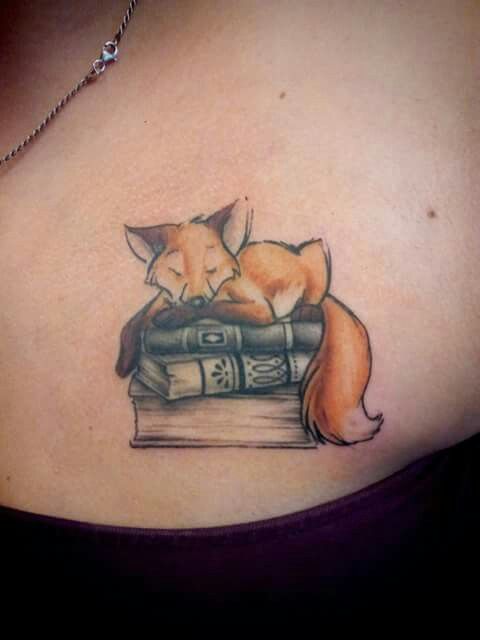 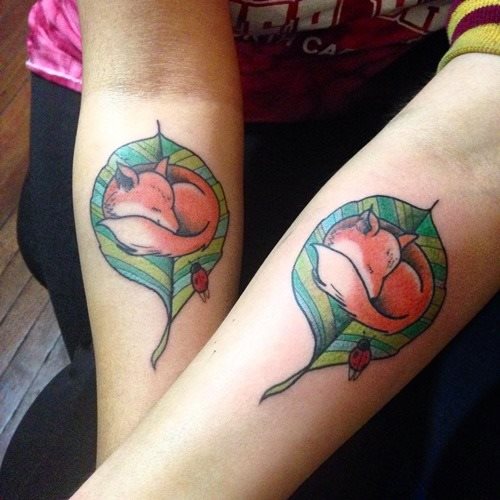 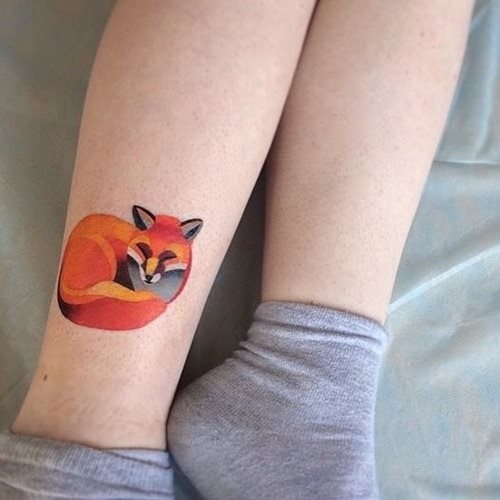 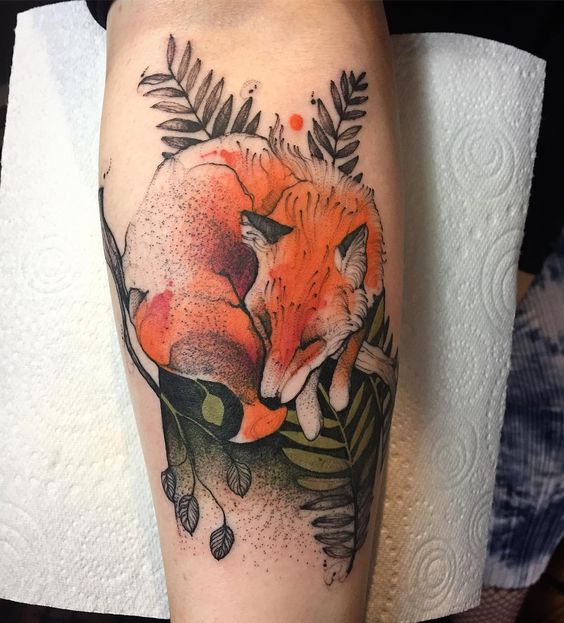 The origins of “black-and-white tattoo” lie in the beginnings of the tattoo art itself.
Since then, monochromatic tattoos have lost in importance, but many motifs still enjoy great popularity, as is the case of the fox.
Black-colored fox is a symbol of good luck in every aspect of life. 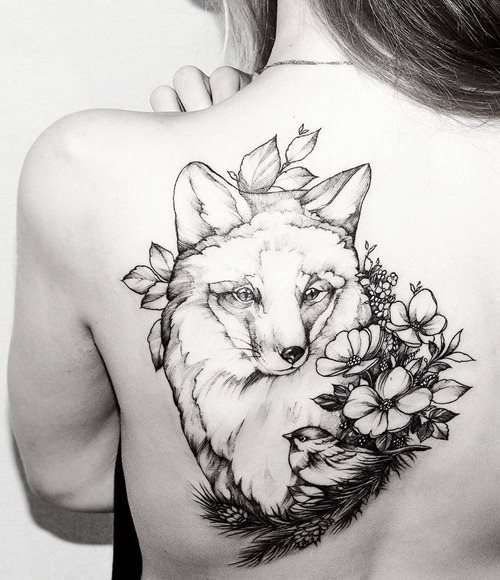 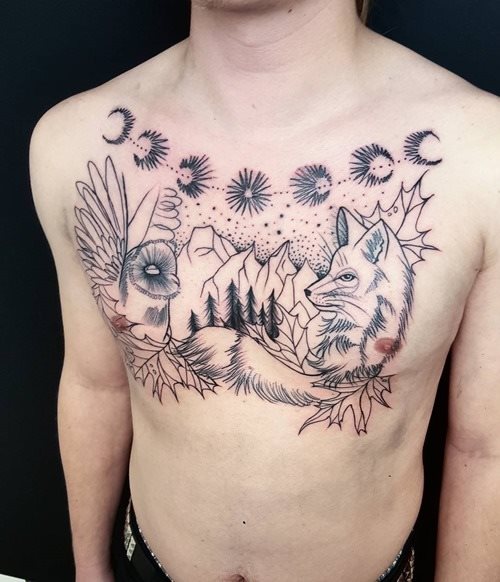 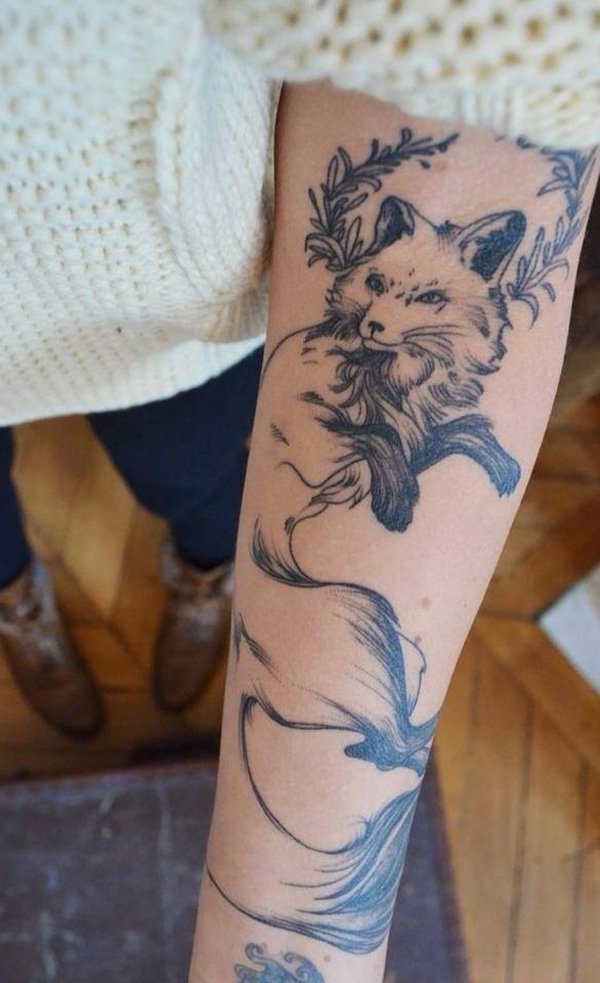 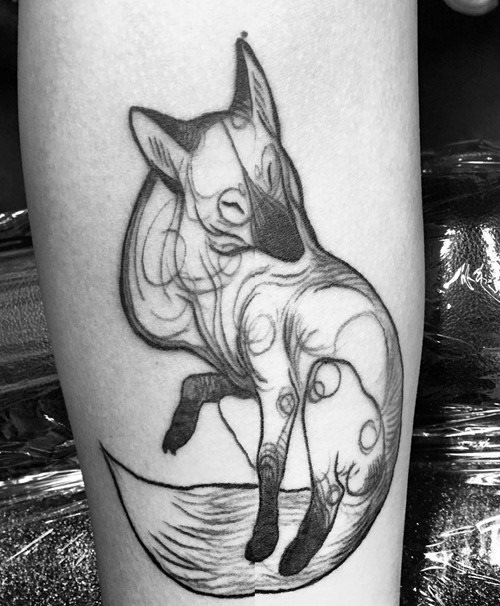