Aquarius is an Air sign, but its symbol is the water-bearer, which tends to create some confusion with those unfamiliar with the zodiac. There are numerous beliefs about the origins of the water-bearer and his importance in mythology, but the exact source is unknown.

In the zodiac, people born between January 20th and February 18th are Aquarius individuals because this is the time of year when the Sun rules the Aquarius. Aquarius is the eleventh sign and is one of the three Air signs and one of the four fixed signs. Aquarius is an Air sign, but its symbol is the water-bearer. There are numerous beliefs about the origins of the water-bearer and his importance in mythology, but the exact source is unknown.

Aquarius individuals are thinkers and individuals. Like other fixed signs, Aquarius signs are focused and determined individuals who are not concerned with the thoughts, opinions, or criticisms of others. They make their own way in the world and follow their own trends. Because of this, they can unintentionally become leaders and trendsetters. The Aquarius person isn’t trying to be a leader or inspire others, they are just being themselves. It is others who choose to follow their lead and copy their style. Aquarius is associated with thought-oriented people, who are constantly trying to solve problems and invent solutions. However, they are not necessarily doers and could contemplate a problem endlessly without ever acting upon their ideas. Aquarius individuals are less likely to be adventurers and explorers, and more likely to be planners and organizers.

Because Aquarians, or Aquarius individuals, are independent, being unconcerned with other people’s style or motivation, and live to follow their own leads, they are often seen as unusual, odd, or mysterious by others. Others might perceive their uniqueness and individuality as crazy or eccentric. Because of this, an Aquarius might be, at different times and by different people, seen as a crazy, weird outcast or a cool, idiosyncratic, and remarkable person. The Aquarian, for the most part, is just happy to be themselves and cares little for the opinions and criticisms of others.

Aquarians never stop thinking and are happiest when they have something, or someone, worth thinking about. Although they were traditionally ruled by Saturn, today they are ruled by Uranus, somewhat of a rebel planet, and move to the beat of their own drum. In relationships, they are caring and nurturing, completely capable of identifying the needs and desires of their loved ones because their mind is so quick and nimble.

Aquarians are happiest with other Air or Fire signs, because these are the signs most likely to be in sync with their beliefs and feelings or to be inspiring and uplifting. Air signs feel contaminated by Water and suffocated by Earth, but they feel Air can support and sympathize with their personalities and Fire can inspire and impassion them, stirring their own creativity. The opposite of Aquarius, however, is Leo, a Fire sign. Leos are also trendsetters and leaders, but, unlike the carefree, easygoing Aquarius, they desire and strive to be the center of attention and the life of the party. Aquarius has other, more important things on their mind.

Symbol of Aquariusis the symbol of Aquarius and their image is a person or vase pouring water. Tattoos that represent the Aquarius probably incorporate water, even though it is an Air sign. People with zodiac tattoos, in general, are likely to believe that zodiac descriptions of personalities and people are accurate, and that their own zodiac represents who they are as a person and individual, listing both their positive and negative attributes. They might put faith into horoscopes based upon their sign, or they might just feel that their personality matches the typical Aquarius personality. Also, an Aquarius tattoo might represent or commemorate a loved one who is an Aquarius, symbolizing that person and their importance in their life. 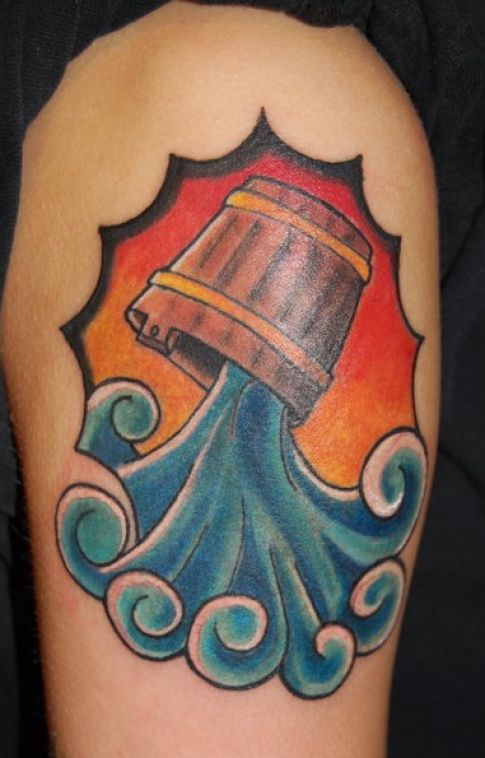