Libra tattoos, like all zodiac tattoos, are most often chosen by people who believe in astrology and the zodiac, or believe that their own personality is in line with the general traits attributed to their zodiac sign.

Libra tattoo can have different meaning to the wearer, depending of their motivation. Some people choose this tattoo because they or someone important to them are born in the sign of Libra, and sometimes because they simply have an affinity for it. To better understand the Libra tattoo meaning let’s see what are the characteristics of people born under this sign, according to the zodiac.

Libra is the seventh sign in the zodiac and is ruled by the planet Venus. People born between September 24th and October 23rd are considered to be Libra individuals. Libra is an Air sign and one of the four zodiac Cardinal signs, in addition to Aries, Cancer, and Capricorn.

Like all Air signs, Libras are thoughtful, insightful, intuitive, and eloquent. Libras excel in communication and make fantastic peacekeepers or mediators. As represented by the scales, Libra individuals have a good sense of judgement and aid others in finding balance. Because of their perceptive natures, Libra individuals are often able to pick up on unspoken conflict and repressed tension in others. They are adept at finding balance and harmony, and are able to use their skills in communication to help others through this process. For this reason, Libras often choose jobs in fields like counseling, psychiatry, and therapy. They are often very aware of social issues and seek to resolve conflict peaceably, encouraging others to to be harmonious with their surroundings and their community.

Libra symbol tattoo is usually represented by a figure, typically a woman, holding a pair of scales or even by a set of scales alone. Another typical tattoo for Libra is the zodiac sign.

The constellation Libra, likewise, is of scales. Each sign in the zodiac corresponds to a part of human anatomy. Libra, for example, controls the kidneys, lover back, and ovaries.

Personal problems for a Libra, like emotional stress or a toxic relationship, can cause problems in these areas. Libras are inclined to experience lower back problems throughout their lives. The colors associated with Libras are ivory or off-white, shades of pink or rose, and shades of blue, especially turquoise. Flowers that are special to the Libra individual include roses, both white and pink, daisies, violets, asters, and orchids.

Libra constellation tattoo, as seen in the images below, can look very stylish both in minimalistic or colorful designs:

Libra tattoos, like all zodiac tattoos, are most often chosen by people who believe in astrology and the zodiac, or believe that their own personality is in line with the general traits attributed to their zodiac sign. Libras appreciate art and beauty, so it is logical for Libras to be drawn to the art of tattooing. Body art and body modification will not appeal to all Libras, as some will see it as destructive, but most will be able to appreciate the aesthetics of a tattoo design. Libra tattoos can also be used to commemorate or honor someone else who is or was a Libra. 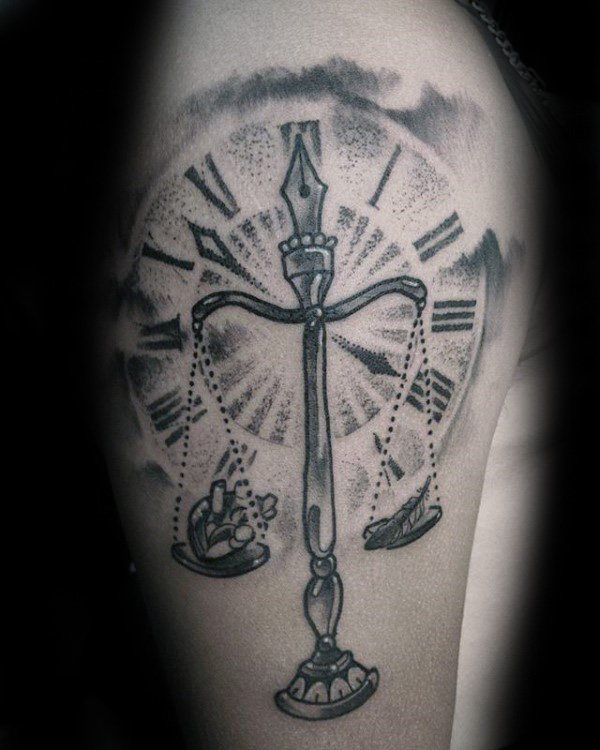